In a newsroom environment, the key to success is how quickly things get done. To meet the demands of this time-sensitive publishing environment, creative talent must work together in an efficient workflow that gets stories to air first. GV STRATUS is a video production and content management toolset that simplifies workflows with a combination of intelligent tools and powerful customization. GV STRATUS enables collaboration where everyone has access to every clip on the network with the tools required to manage content. These requirements apply to a PC running the following:

These minimum requirements apply to a device running the following: This section describes the modular components that comprise a GV STRATUS system. These components interact with the video server and storage infrastructure, to form combinations of solutions that best meet user-specific technical, operational and business requirements.

Designed as one application capable of supporting many different usage models, a GV STRATUS client can be configured for every type of user in a media facility, whether for feed scheduling, storyboard editing, channel control, media management or playlist playout. The GV STRATUS tools function as a client to GV STRATUS Core Services, running on a standard Windows operating system computer.

If the GV STRATUS client PC is not connected as an iSCSI client (or does not have a high resolution client license), such as on a distributed K2 system, the GV STRATUS tools and the EDIUS XS editors access low-resolution live streaming (across the network from the video servers) and proxy media (from the GV STRATUS Proxy server in the Core of the system).

The GV STRATUS web client connects to the Core Services and provides access to many of the same services.

These servers are the primary devices that support GV STRATUS system functionality and services. They can be configured in a variety of ways to support the use case requirements of specific environments.

Variants of GV STRATUS servers include the following:

Proxy Server— The GV STRATUS server combined with an online or production K2 SAN that provides access to the low-resolution proxy media stored on the SAN. The server has the role of Proxy Storage server and shared file system client.

GV STRATUS Render Engine— A server dedicated to performing proxy encoding, conform and rendering services, to transcode complex assets, such as a GV STRATUS sequence, into a single clip. This service also renders EDIUS projects when exported or sent to playout.

Fault Tolerant (FT) GV STRATUS Server— An enhanced platform designed to reduce the risk of system failure in mission-critical media production environments. Fault tolerant server options are available for all the physical Core Server variants, with the exception of the Core Server Express.

GV STRATUS Storage Manager— A server dedicated to managing the storage file system database within a qualified third-party storage system. The Storage Manager is analogous to the File System Manager in a K2 SAN system. Available only as a Fault Tolerant server package.

STRATUS-SVR-UPG12
Physical to Virtual Upgrade for STRATUS Proxy servers in A1, B1, C1 systems 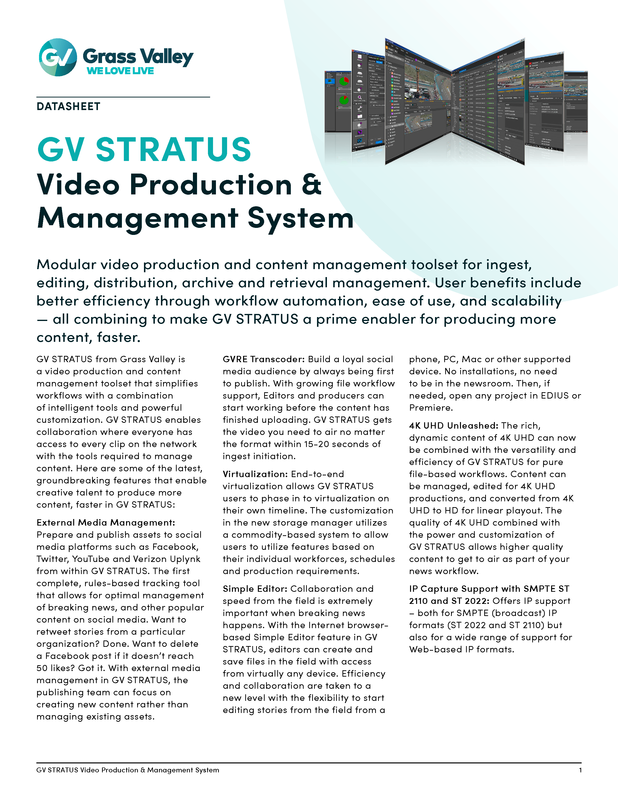 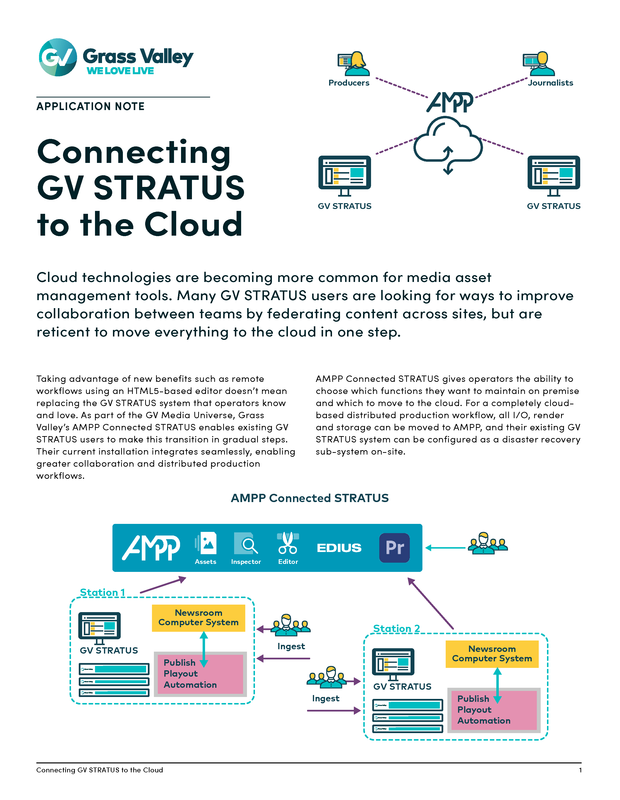 Cloud technologies are becoming more common for media asset management tools. Many GV STRATUS users are looking for ways to improve collaboration between teams by federating content across sites, but are reticent to move everything to the cloud in one step.

Visit Library
Go back to top